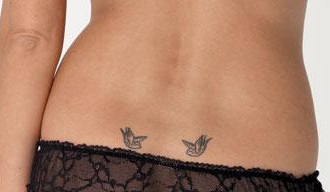 If a picture’s worth a thousand words could a tattoo be worth a million dollars?

That just may be the case with a tattoo Kate Moss has on her low back. So what makes Kate’s tattoo more special than anyone else’s? Kate Moss was tattooed by world-renowned German painter Lucian Freud.

The two met in 2002 when Kate agreed to pose for a nude painting while pregnant. She says Freud was telling her about doing all of the tattoos for the sailors when he was in the Navy. He offered to tattoo her, and after a short discussion about what she liked, he tattooed “a flock” of swallows on her low back. She joked with Vanity Fair saying that “if it all goes terribly wrong, I could get a skin graft and sell it!” It is an original Freud, after all.