The Right Laser for the Job

As with anything it is important to have the right tool for the job. While a butter knife may be a decent substitute for a flathead screwdriver, it isn’t the best option. The butter knife is more pliable than a screwdriver and may bend, making it unsuitable for spreading butter at the dinner table. Sometimes the butter knife is too wide to fit into the tight opening provided for the screw, so even though it would be able to turn the screw, it can’t get close enough to actually do the job.

Likewise you would want to make sure the right laser is being used for your laser tattoo removal procedure. Though some lasers may get decent results, are they the best option for the job? Some hair removal lasers are able to be recalibrated to make them safe to use for tattoo removal. Most hair removal lasers, however, apply the energy for far too long which often results in scarring. So even if a hair removal laser can be recalibrated for laser tattoo removal, be careful. After a few treatments a noticeable difference can be seen, but will that laser ever be able to truly remove all of the ink from the tattoo? Possibly, but if it’s not the best laser for the job, you may be going back more times than is necessary. A cheaper price per session may result in more sessions, and in the long run may not save you any money or time.

The tattoo pictured below was treated about 8 times with a recalibrated hair removal laser. The photo on the left shows the tattoo after those 8 treatments. The owner of the tattoo said that visible results were seen with the first few treatments, but after that, the results were not as impressive. It became obvious that this particular laser was never going to completely remove the tattoo. Other options for complete removal were sought.  When the tattoo arrived at Vanish it was obvious that some fading had occurred, but more was possible with the use of the Trinity Laser by Astanza, a laser specifically designed to remove tattoo ink and other skin pigment. The photo on the right shows the dramatic difference just one treatment with the right laser made on the tattoo. This photo was taken about 1 month after the first treatment at Vanish. The owner of the tattoo is very pleased by the results so far. 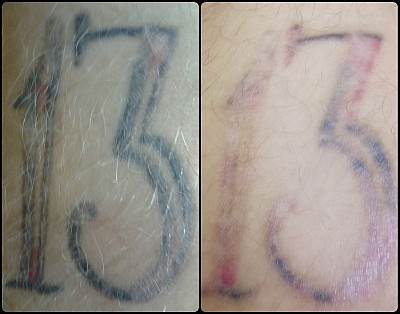 When researching laser tattoo removal, remember it is imperative that the facility you choose is using a laser specifically designed for removal of tattoo ink and other pigment. If you are unsure, ask the facility staff what type of laser they are using and research that particular laser. Keep in mind that tattoo removal technology is not cheap. If a price quote sounds too good to be true, it may very well be.